The Goal of Nature’s Design

I joined this team and project at the start of August, really only a few weeks ago, but it was about two years ago I had first heard about Biohaviour, so it’s not a huge concept for me to wrap my head around now. I’ll quickly sum it up for you.

Biohaviour is built to capture the natural design process in the form of design genes and seeds. From the principles of life’s design, Biohaviour can produce a seed that can grow until it meets the desired goal, it will not grow beyond that goal and it will not stop until it reaches said goal.

So the goal controls the design, but what is the goal?

The simplest goal of a plant, like many other living objects, is too survive which is why they will adapt to their environment. There can of course be instances where the living objects cannot survive, this could be due to mutations and crossovers in the design genes or that nature is struggling to evolve as quickly as the environment at the moment, there are lots of reasons. However, I digress from my point which is plants and living objects have a specific goal already defined into their genes so their design will grow and adapt to meet that goal.

Any gardener knows that with careful control of the environment they can encourage the plants to do different and equally beautifully things while achieving the same desired goal, survival of a beautiful design (http://biohaviour.com/edenic-engineering/).

But I am no gardener… I am an engineer, and as a (relatively) young engineer I control the design and goal of the object!

Richard Dawkins once stated ‘machines are the direct products of living objects, they derive their complexity and design from living objects’. Yes, I tailor that design to meet manufacturing specifications, environment conditions and any other conditions required to fulfil my goal but it is all still within my control.

With Biohaviour, designers must relinquish the majority of the design control and be open to the possibilities associated with biological design, while still achieving the same goal.

So a gardener has some control over the design by altering the goal of the plant. How did the gardener alter the goal? By changing some small factor in the environment the plant seeds goal was then to survive in that new environment. As simple as it is to say that a living objects goal is to survive that is not really the full goal, it’s not quite as simple as providing that one definition, especially not when we are creating objects.

Let’s switch it up a bit and say I want an object that I can sit on, so you produce me this high stool 1m up from the ground with three legs (Fig.1). No, I don’t like that, I want an object that I can sit on with back support, so you alter the object to meet the new goal requirement (Fig.2). I am still not happy; I want an object to sit on with back support where my feet can touch the ground, so again, you alter the design (Fig.3). Lastly, I want an object I can comfortably sit on inside my house for a few hours with back, arm and cushioned support, again the design alters. Every single one of these design concepts you now see supported the initial goal I started with, they are all objects I can sit on. This can go on and on and on …. With numerous design possibilities. Are you getting my point yet? 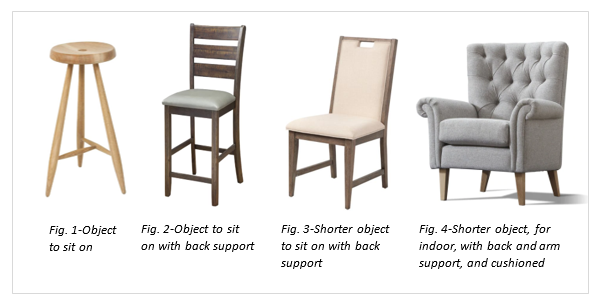 I’ve kept my example relatively simple, but there was nothing stopping me throwing in a picture of a wooden block as an object to sit on, it would still have achieved the goal right? I doubt it would have been the desired outcome, but it leads me to question a goal.

As a designer I know my goal, as a gardener I know my goal, but how do we define a goal so this biological system can grow a seed to meet that goal? How can Biohaviour translate and understand what the goal is while the seed grows? How does the seed evolve as the goal alters? What really is a goal and how is it best defined?